A couple of weeks ago, I did a live quilting demo on my YouTube channel featuring one of the National Parks panels and some of my favorite threads. I was showing off a fun machine quilting technique, thread painting. 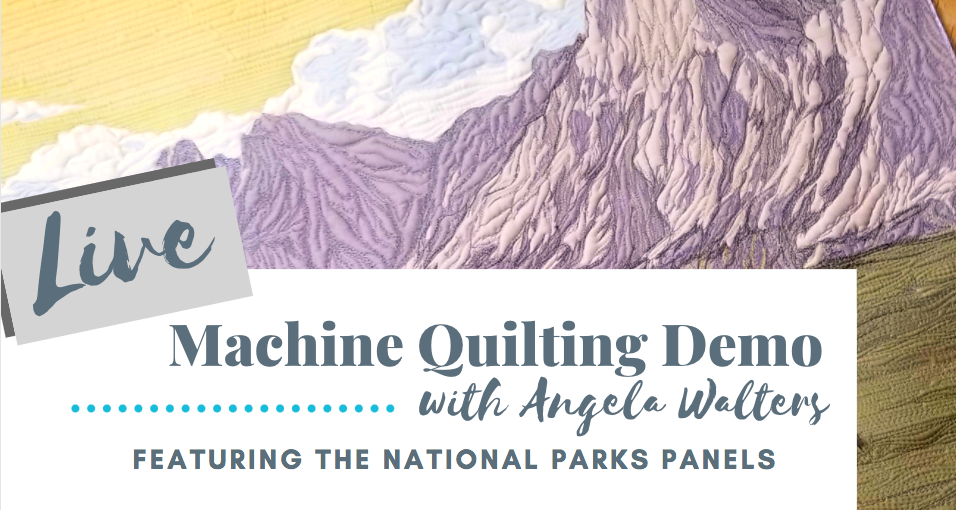 If you’ve been thinking about giving this a try, you should! It’s not as daunting as you might think.  Below are 4 tips that just might make it a little easier!

Tip #1  Use a panel or bold fabric print as the starting point.

Think of it almost like a coloring book, instead of staring at a blank page, it’ll be so much easier if there are lines  for you to fill in. These National parks panels are perfect for this! 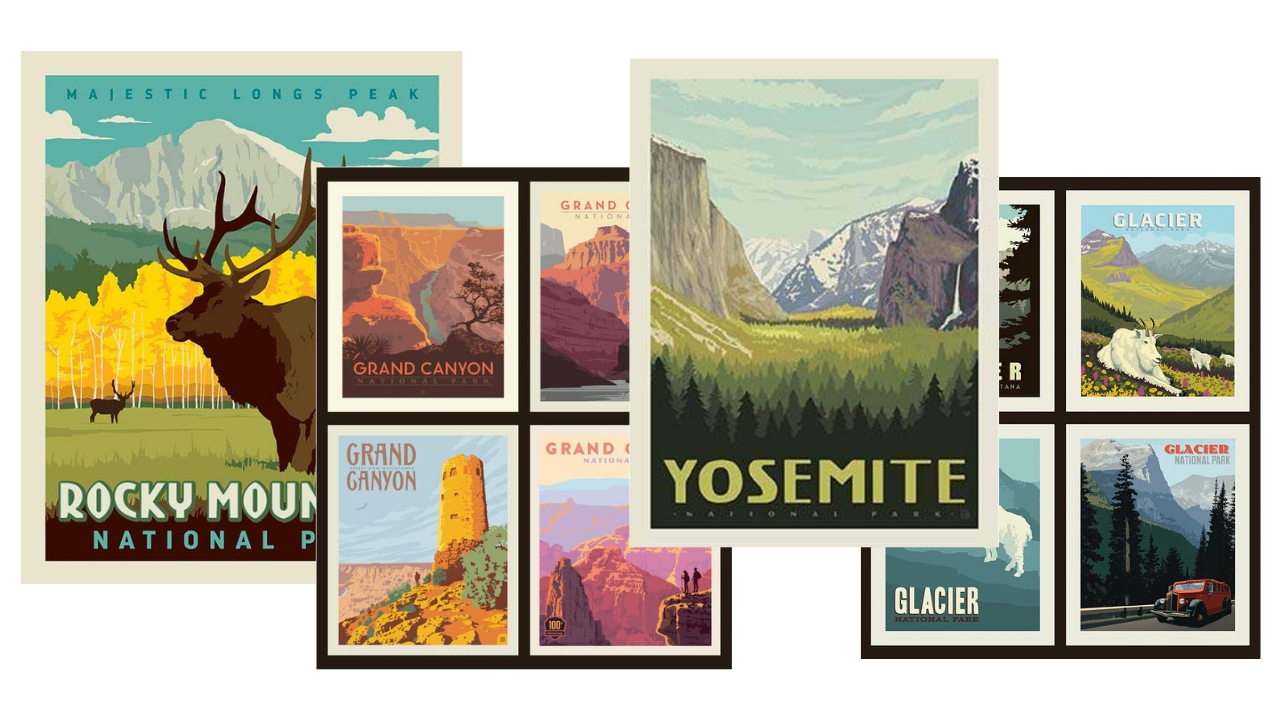 They have enough detail to give you a starting point, but not so much detail that you won’t see the quilting. After all, you kinda do want to see all the amazing thread you put on the quilt.

Tip #2 Start by quilting some guidelines

Using a thread color similar to the area you’re quilting, start by quilting some guidelines. These are the main lines that you will quilt around later. Don’t overthink this part. They don’t have to be perfect at all, in fact, sometimes, it’s better if they aren’t.

When quilting the Badlands National Park panel, I started by quilting along the edges of some of the colors. Then I added some of my own lines. 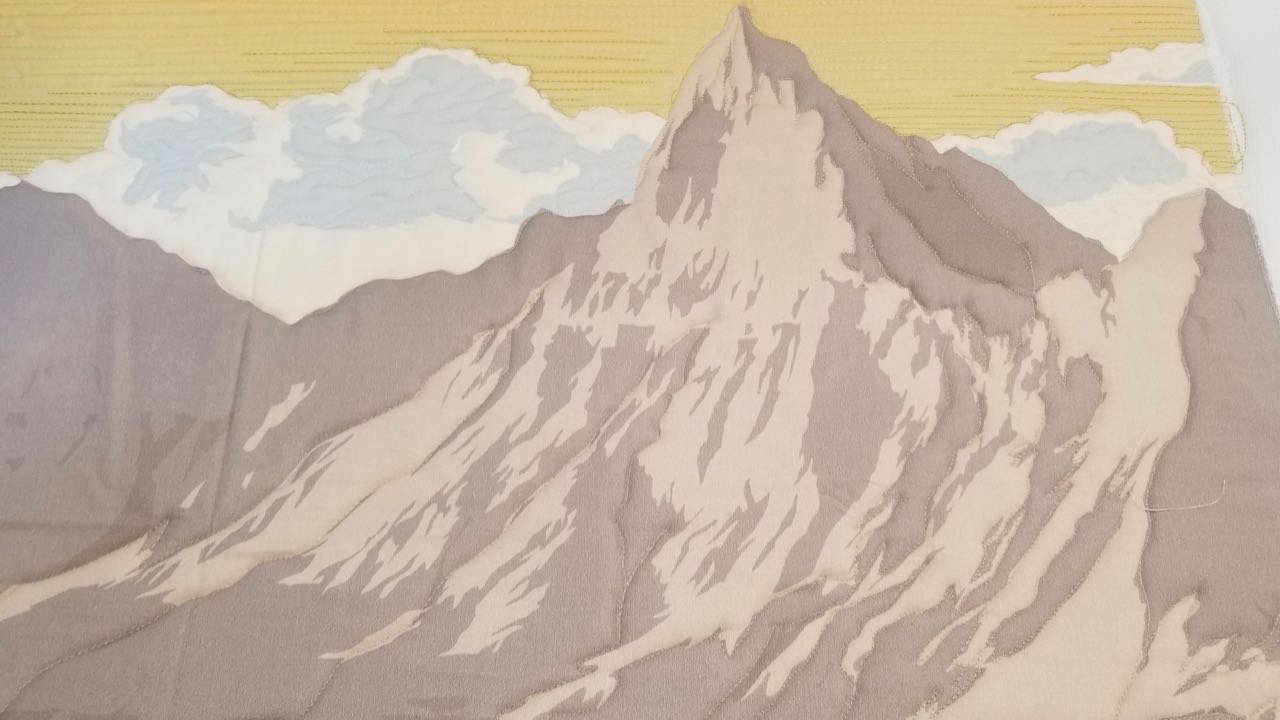 Using a thread color that is similar to the fabric will help you see the texture of the quilting without being overwhelmed by the quilting. It will also give you a chance to get “warmed up” to the idea of thread painting before you start using contrasting thread colors. 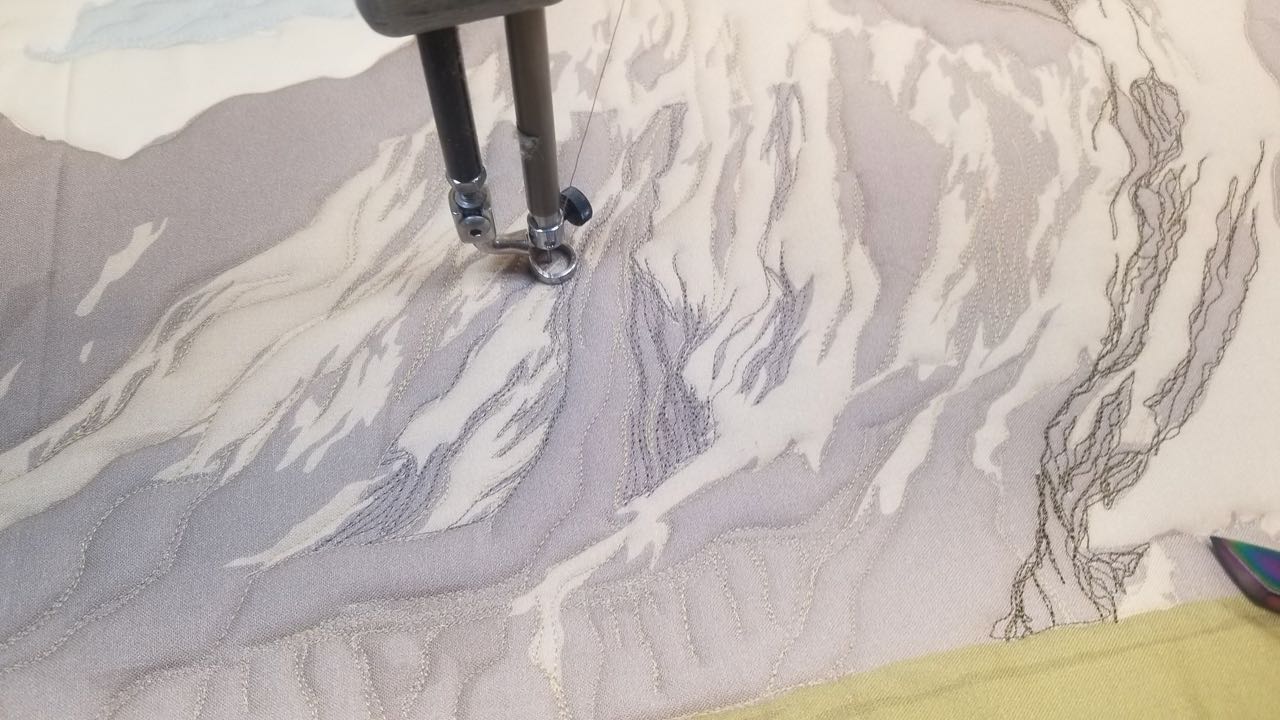 Once you’ve quilted the guidelines, start filling in around them with more quilting. Again, don’t overthink this! You might find it easier to think of this as thread “scribbling” instead of thread painting. 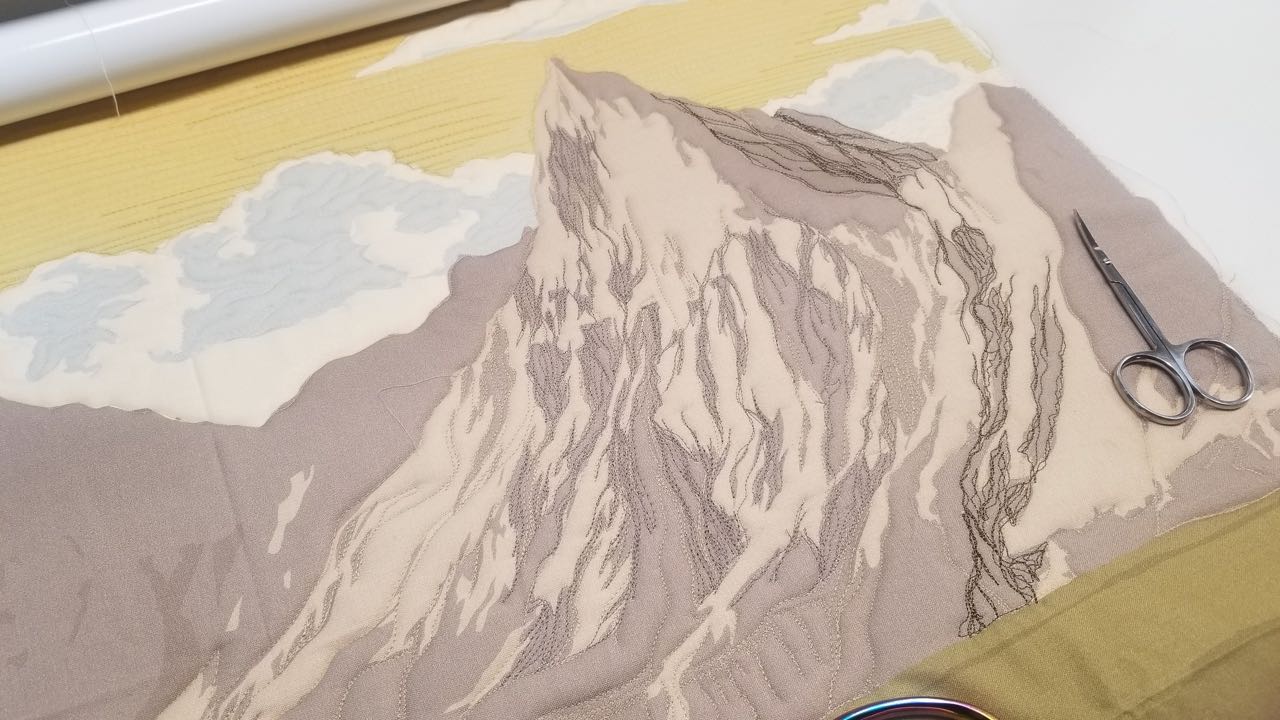 This is not the time to be shy about your thread colors! The more colors you use, the more detail and interest you will add to your quilt. Plus it can be a handy way to draw attention to some areas or away from others. 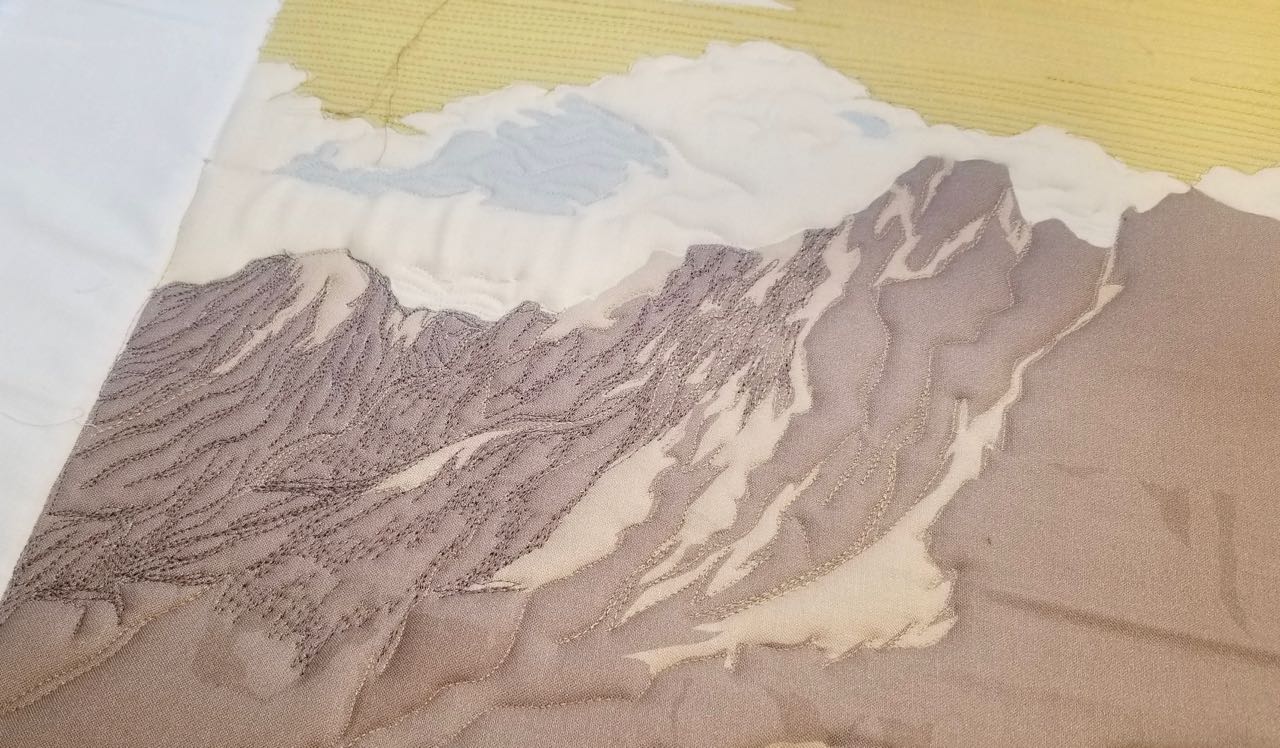 As I quilted the mountains, I filled in most of the area with different shades of tan thread, mostly using Superior So Fine thread (a 50wt thread that doesn’t have a sheen). 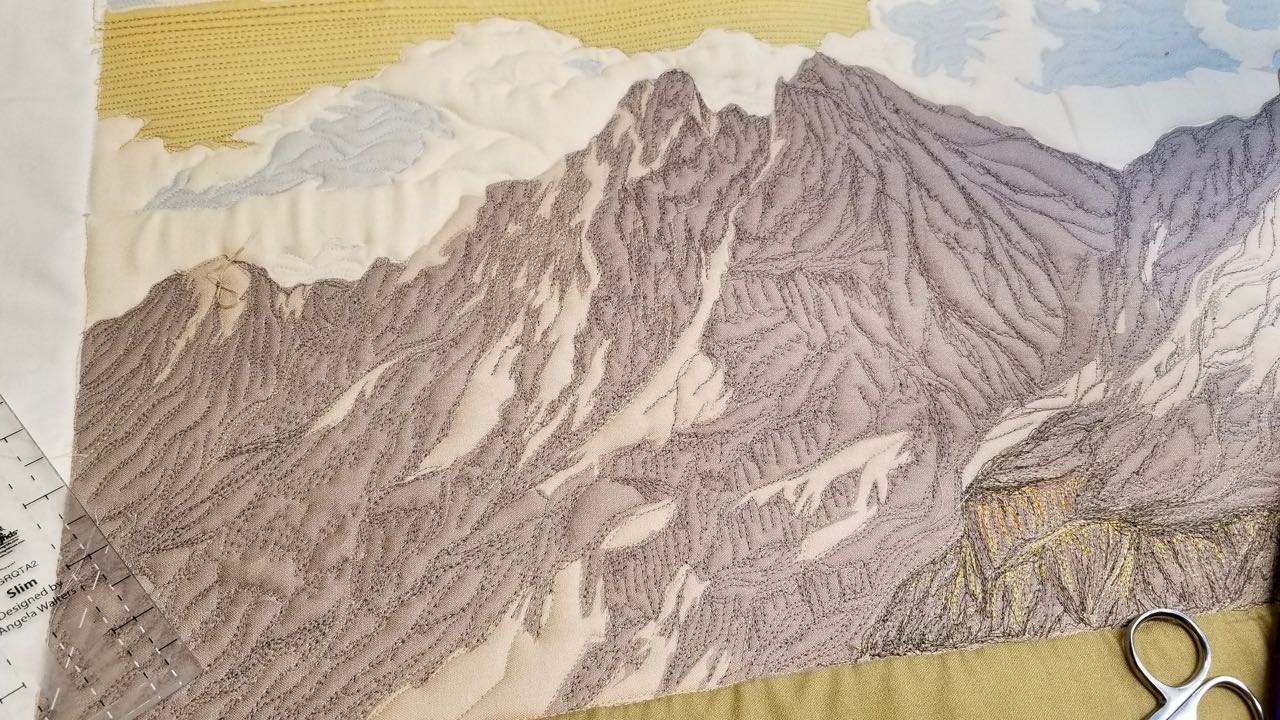 Then it’s time to add the wow!

After most of the area is filled in, use a couple of lighter and darker thread colors to really make the details pop. 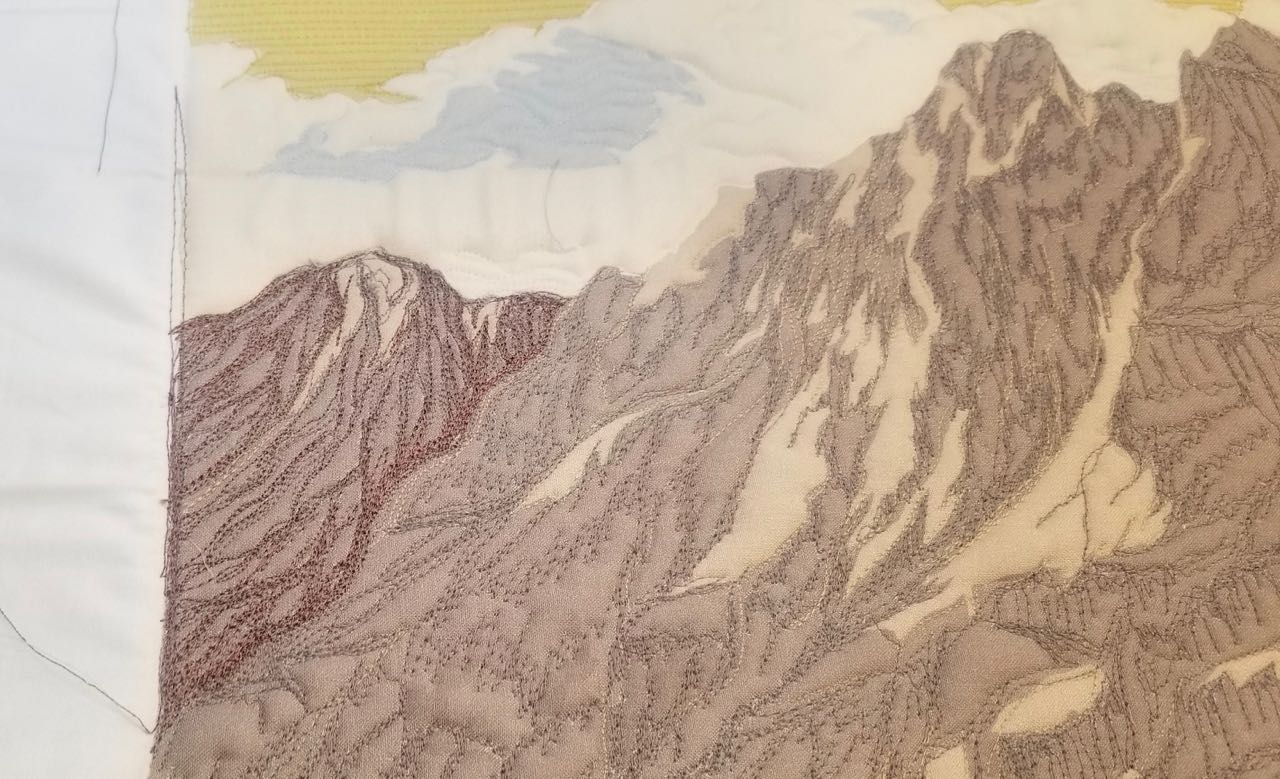 I added some darker quilted lines to the mountain using Glide thread. Since it’s a 40wt thread with a bit of sheen, it stands out more than the So Fine thread.

Here’s the good news: If you try out a thread color you don’t like, simply quilt over it with a different color. This is something I had to do a few times. 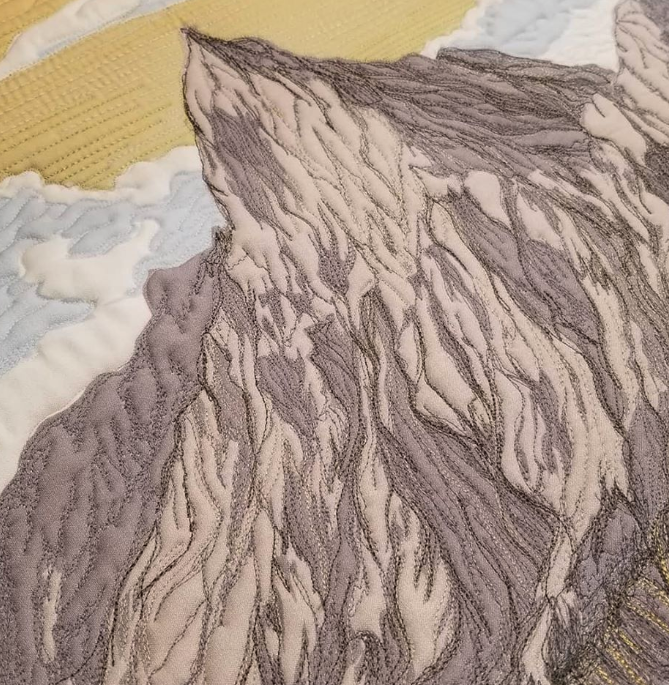 In addition to using several different colors, be bold with your thread color choices. Adding an unexpected color can produce beautiful results. I encountered this on a Yellowstone panel I was quilting. 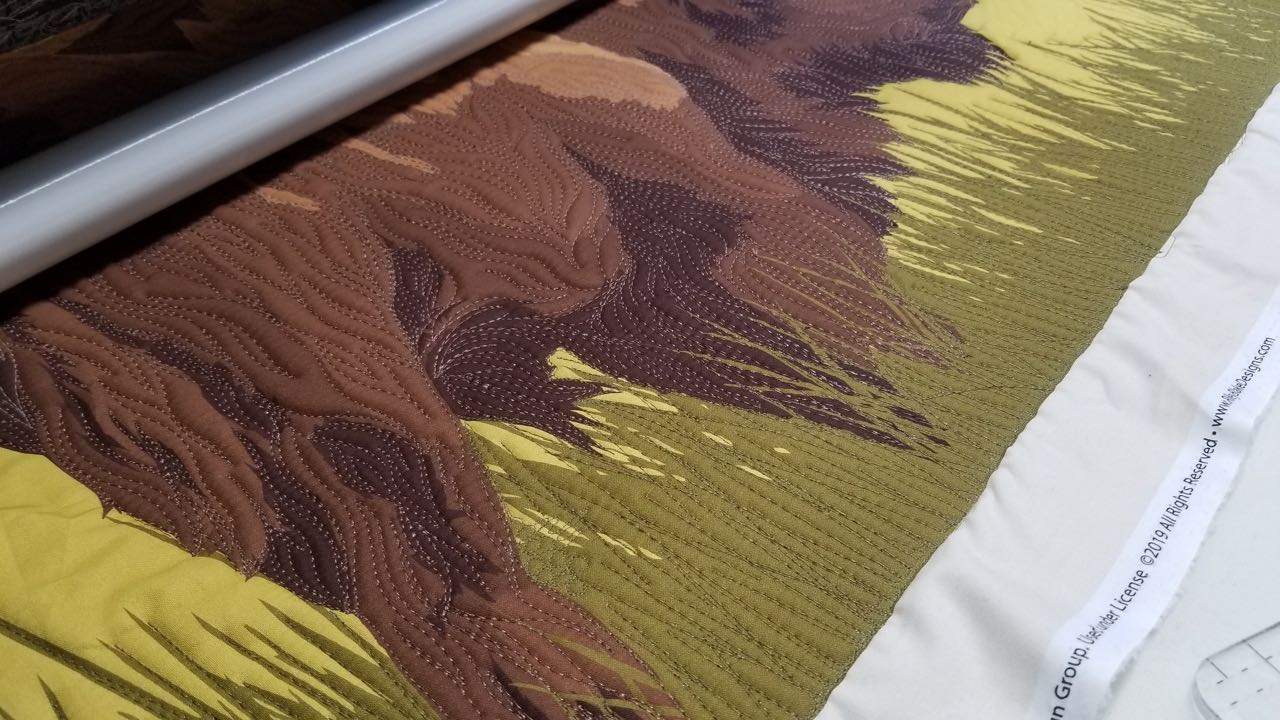 As I quilted the grassy area, I knew it needed a little something extra. I considered using a light green thread, then realized that shiny gold thread was even better. 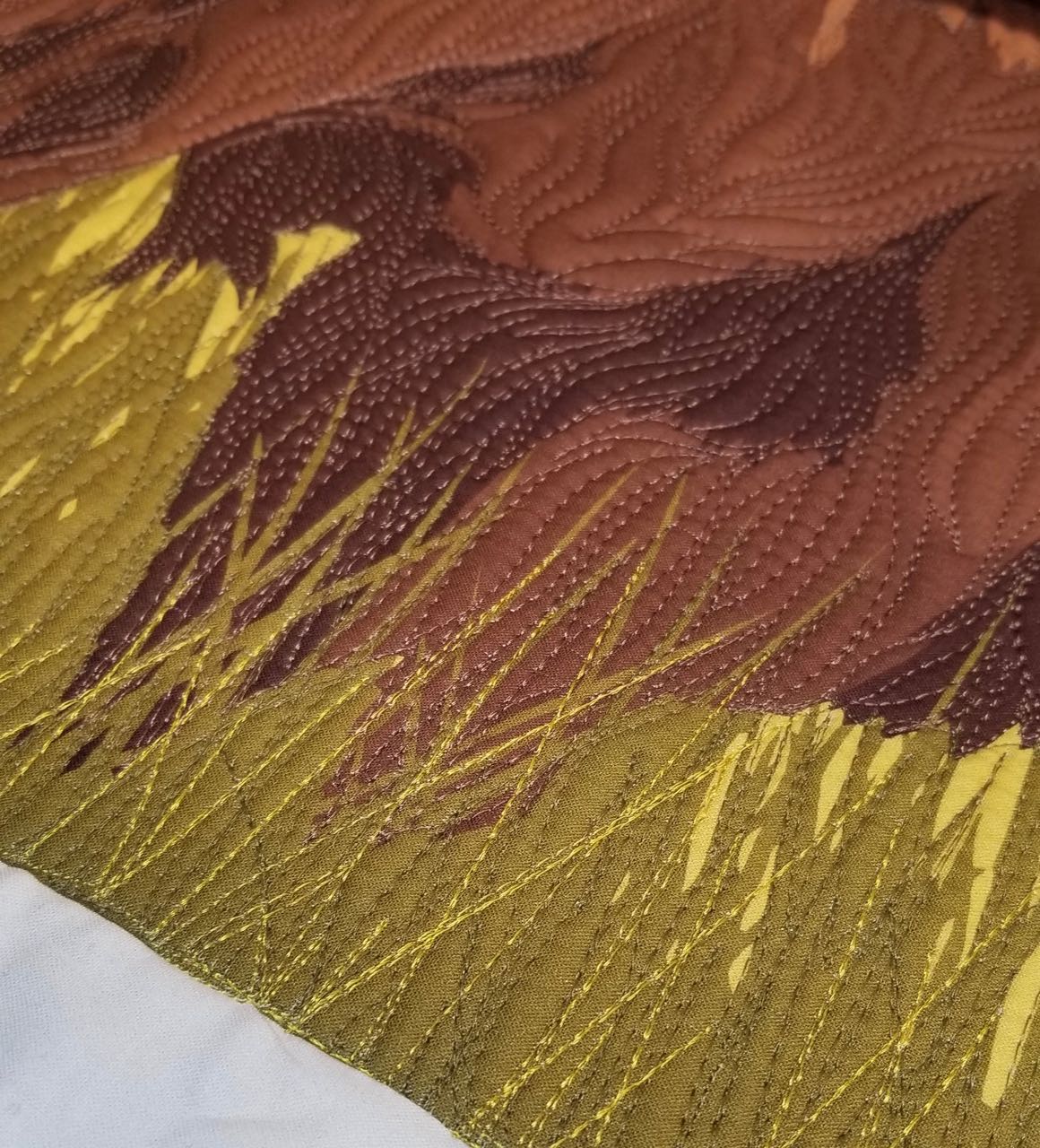 A little bit goes a long way to make the quilting shine!

Tip #4 Highlight one main element of the fabric.

On the Badlands panel, I felt that the mountain range was the most striking element, so that’s where I focused most of the quilting. 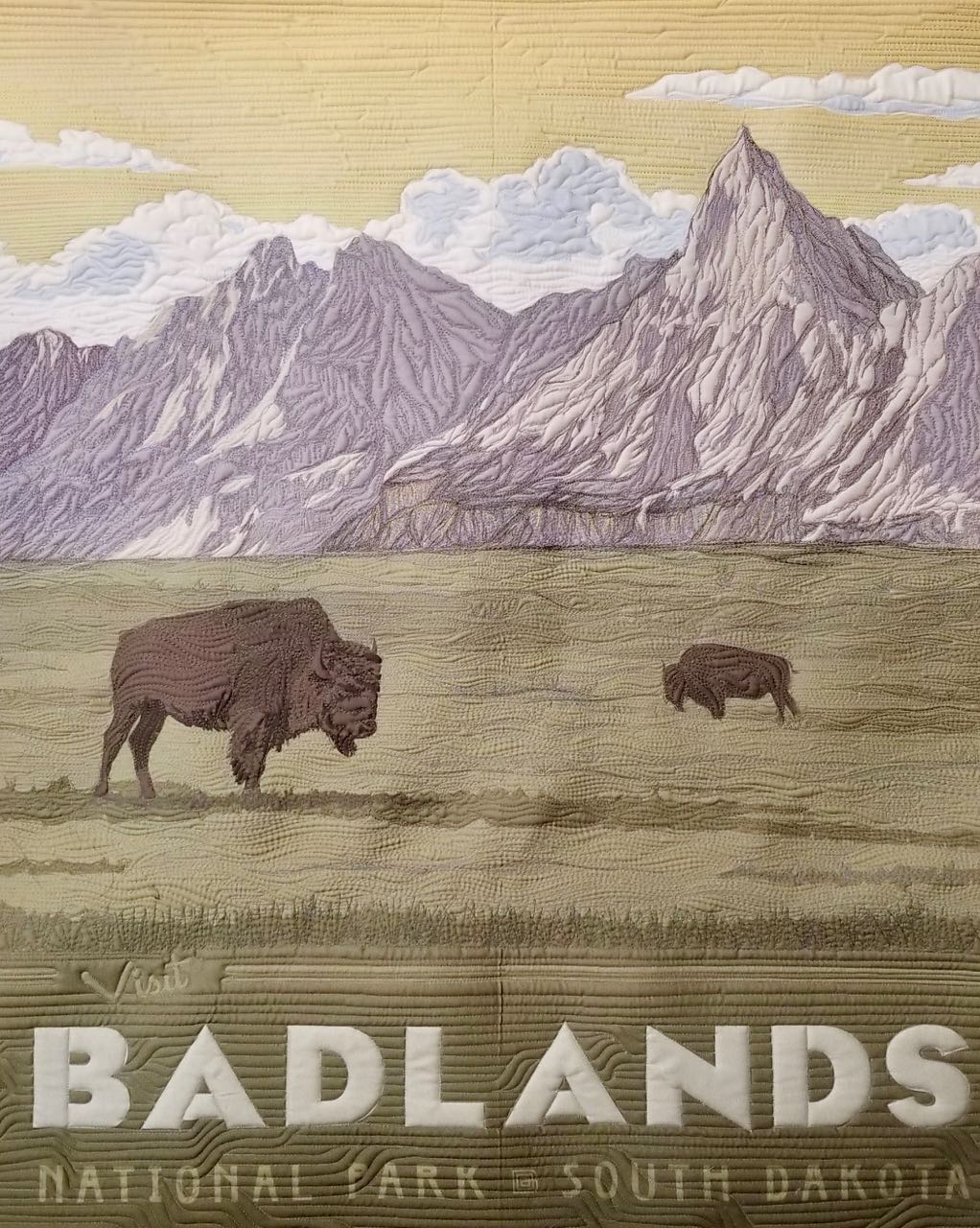 However, in the sky and the grassy areas of the panel I kept the quilting more basic. 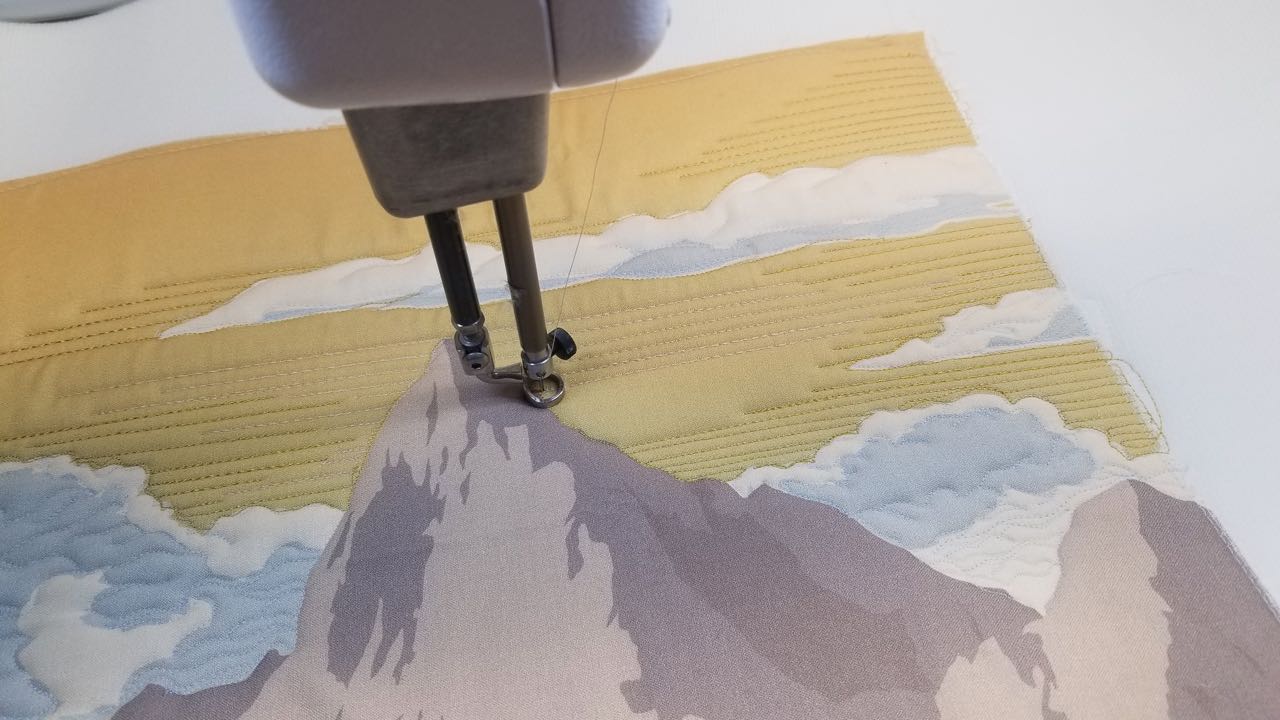 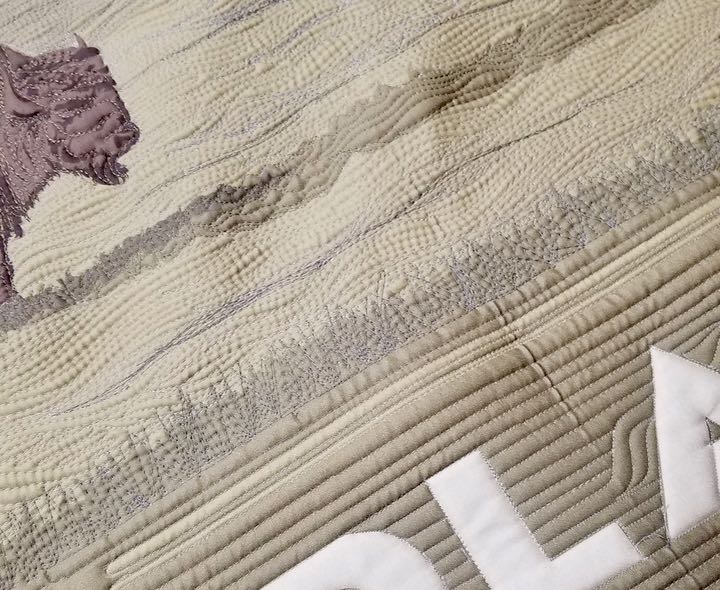 Let’s compare that to the Yellowstone Panel that I also quilted. 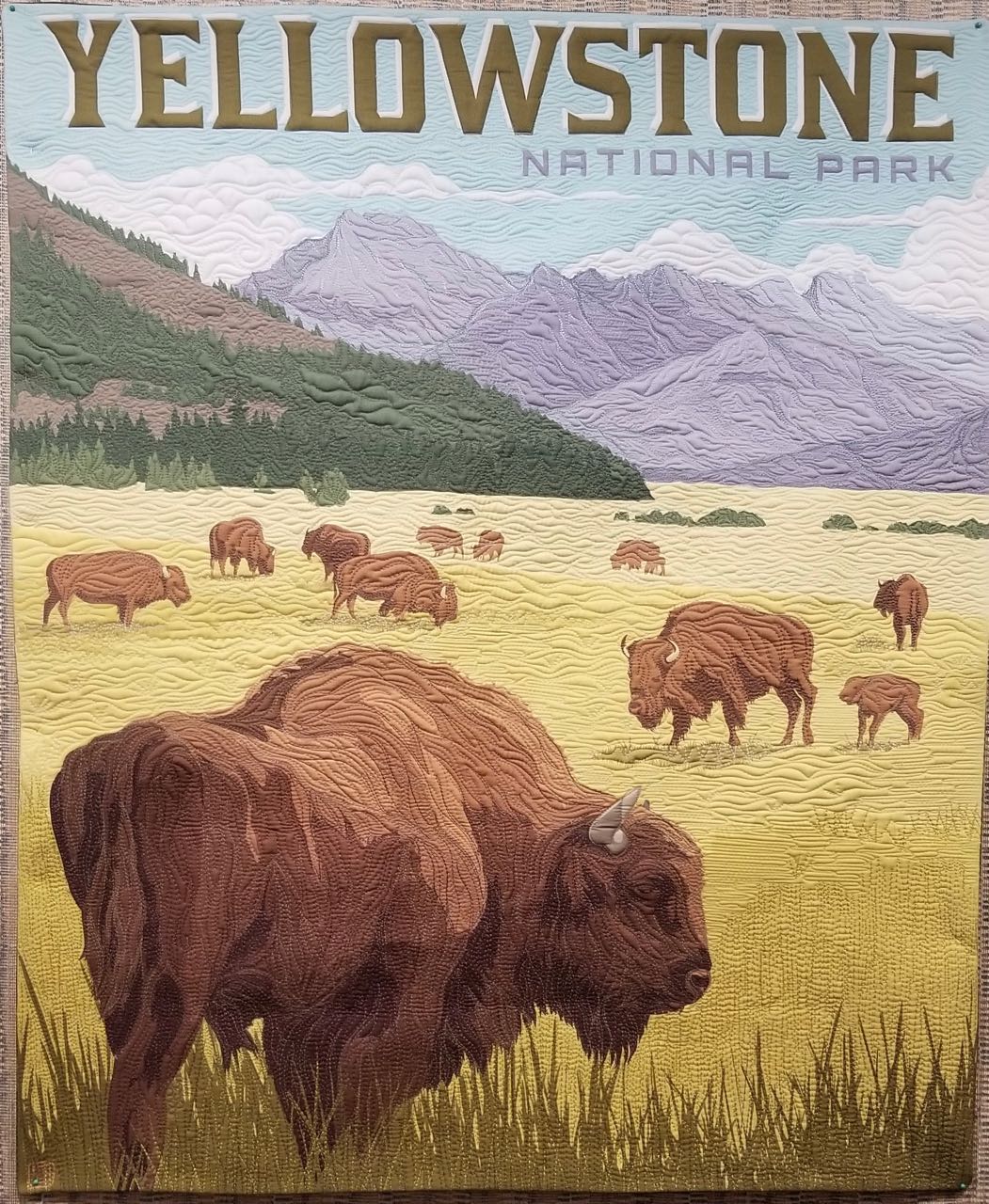 In this panel, I thought the buffalo was the most striking part, so I didn’t add as much detail in the mountains. 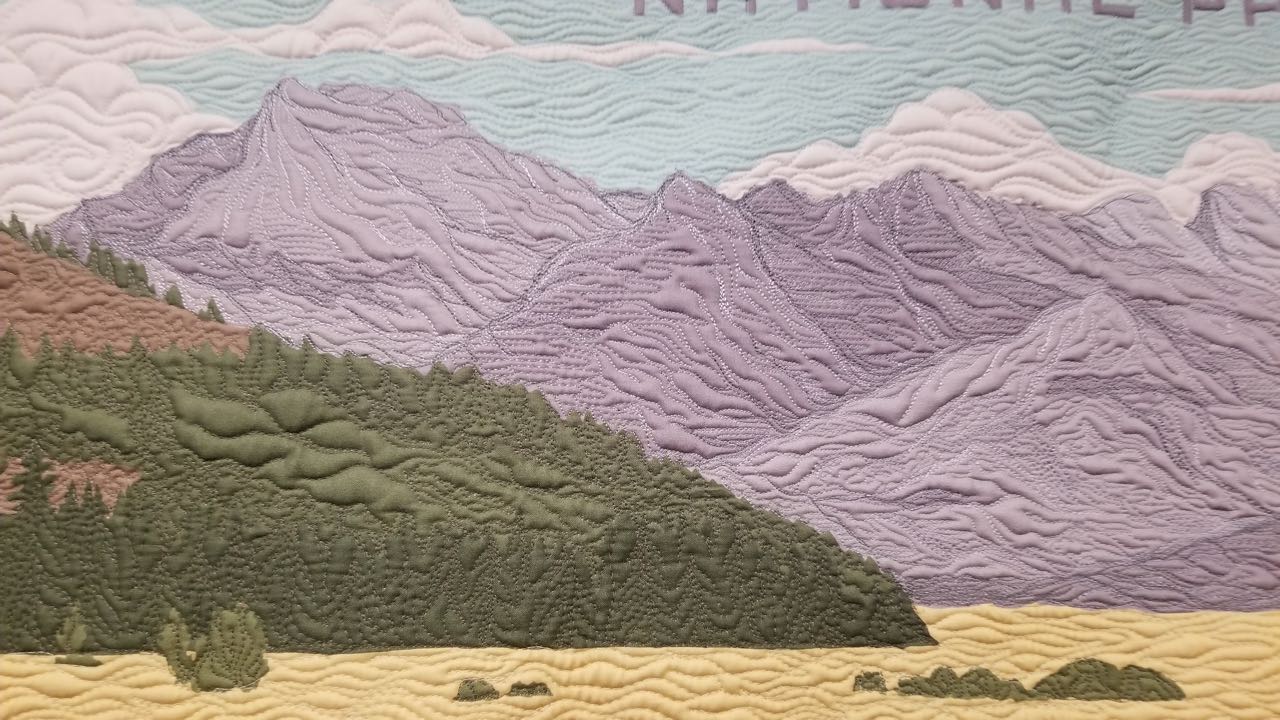 But once I started quilting the buffalo, I followed the same routine that I did on the Badlands panel. First quilting the guidelines, then filling in with different thread colors. 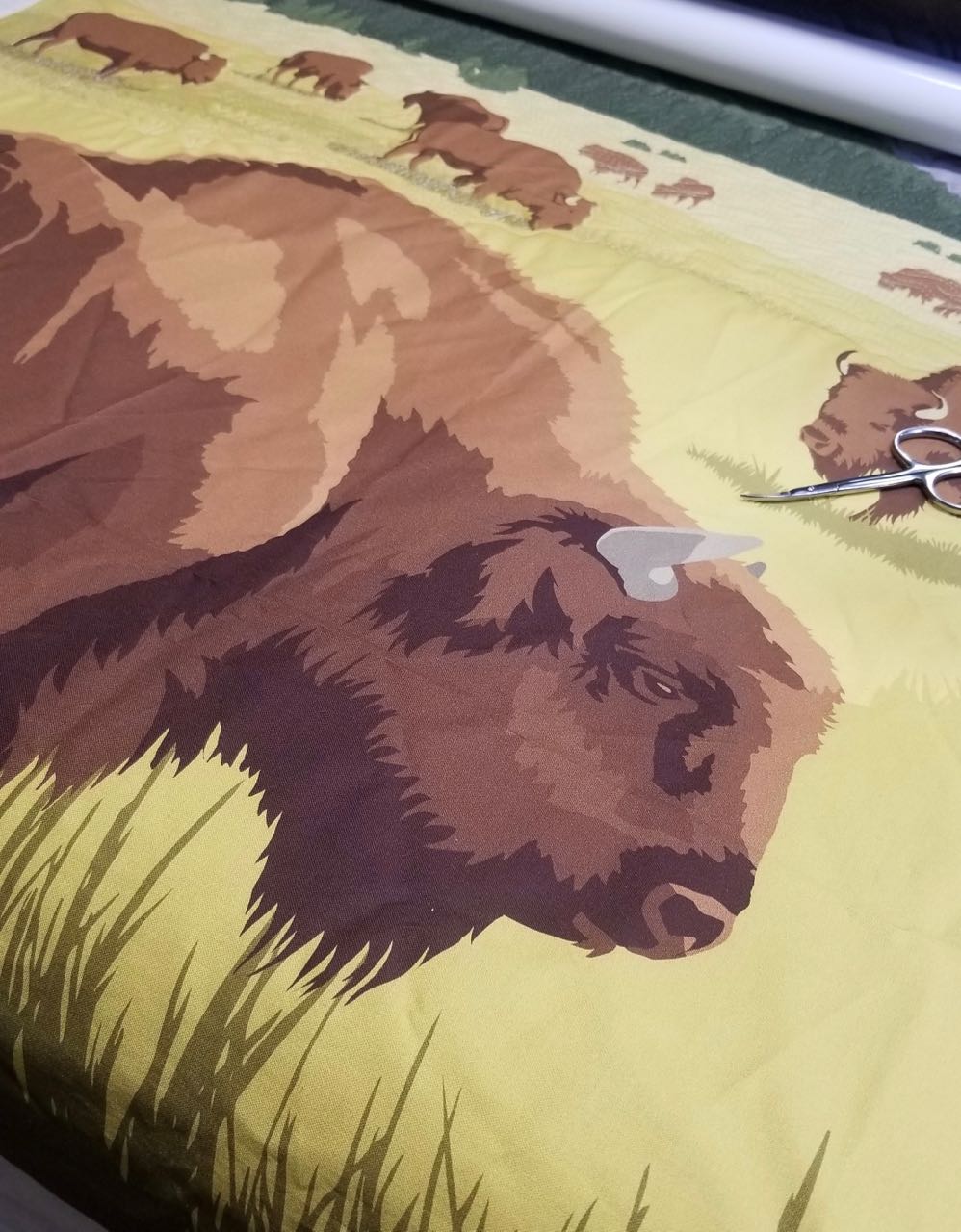 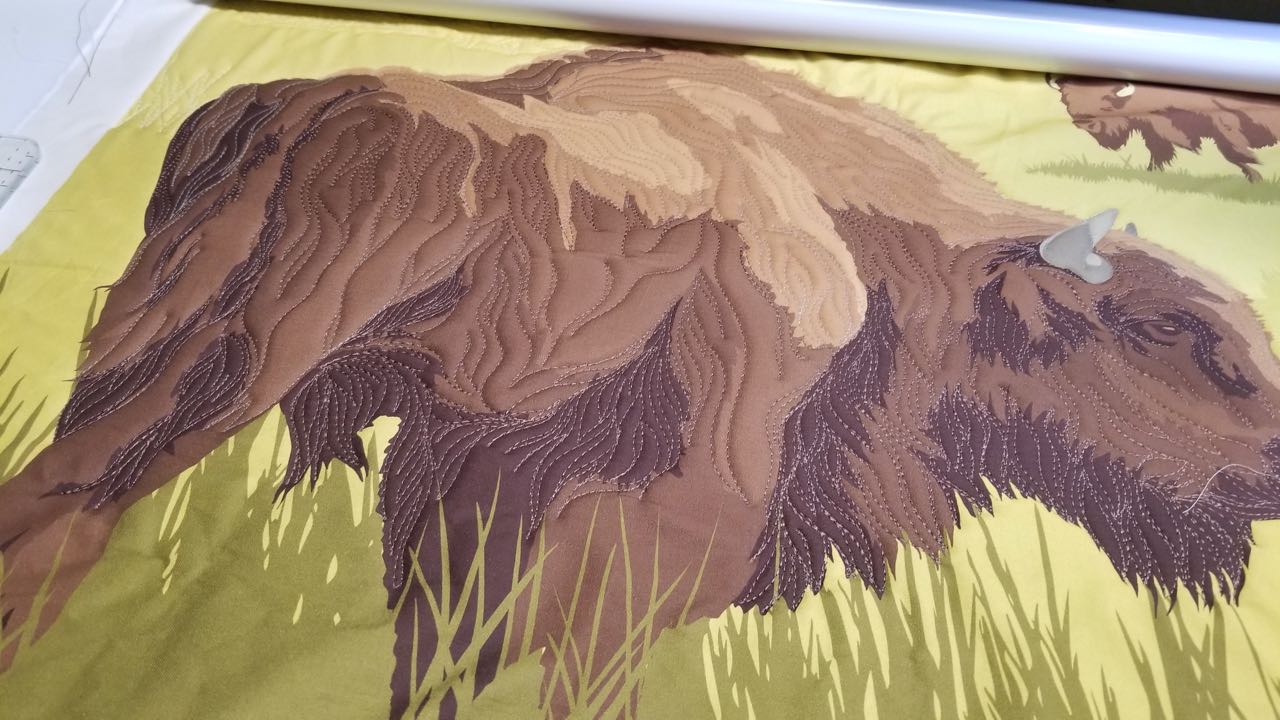 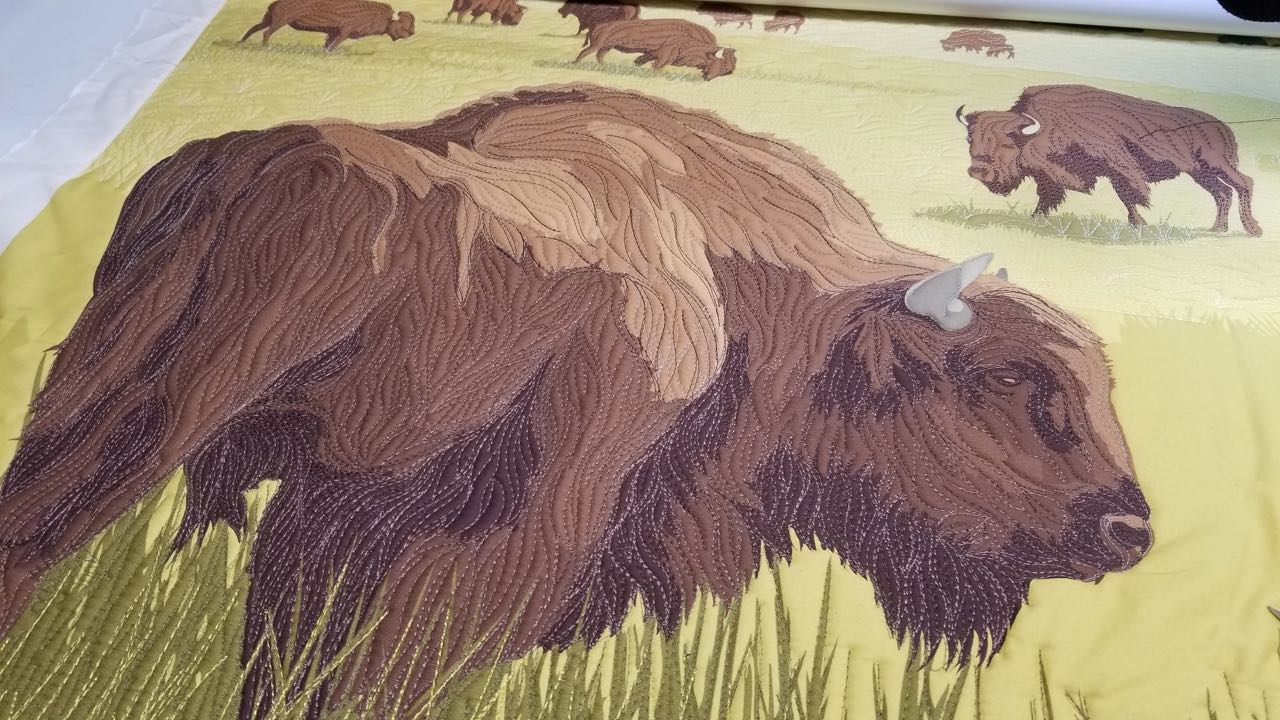 Hopefully, between the video demo and these handy tips, you will empowered to give this technique a try! To see the different threads I used or to learn more about the National Parks panels, click here.

Let me know what you think by leaving a comment on this blog post and I will do my best to answer it! Happy Quilting