Who doesn’t love a beautiful feather? That’s rhetorical question, of course everyone loves feathers. Ok, maybe not everyone, but it seems that a lot of quilters love the look of them. But when it comes to quilting them….it can be a little tricky.
That’s why I have put together a new video tutorial featuring how to quilt my favorite feather, the Paisley Feather. I want everyone to love quilting feathers as much as I do!

About the Paisley Feather

This is a great feather for beginner AND advanced quilters. The construction is fairly simple, but the versatility of the design makes a great go-to design for quilters of all skill levels. 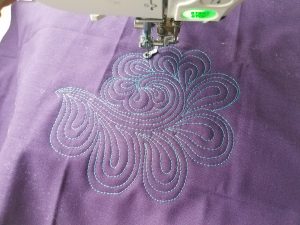 It can be quilted as an allover design or used to fill in around blocks of a quilt. Once you learn how to quilt it, I think you will be excited to use it on one of your quilts!

Before I share the link, I want to give you a few tips to help you get the best Paisley Feather possible!

Don’t Judge Your Quilting Too Soon

It can be tempting to quilt a small portion of the feather, then stop to judge how it looks. But that only will only give you part of the picture. It’s best to fill in a whole section before you decide how you feel about it.

Doing this will help you see how even glaring mistakes can tend to disappear once surrounded by more feathers. This really is one of the magical things about quilting.

Quilt Them Big and Beautiful

I mention this in the video tutorial, but I want to reiterate it in this post. Your paisley feathers will look so much better if you echo around the paisleys and really make them nice and big. 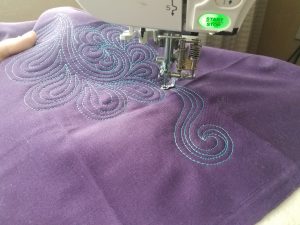 I know when learning a new design, it can be tempting to quilt them so that they are small. But trust me, it looks much, much better when the feathers are nice and big Plus, it’s a lot quicker to quilt. That’s a win/win in my opinion.

In my opinion, the hardest part about quilting paisley feathers is dealing with the gaps that can form in between the feathers. But that doesn’t mean you need to stress about it. Most people will notice a gap in the quilting before they notice an error.  That means that as long as you fill in any gaps it’s going to look great!

With this design, I like to use echoing to fill the gaps. It doesn’t matter what you echo, or even if you quilt something different altogether in those spaces. Just fill them in and move on to a different area of the quilt!

If you have ever taken a class from me, you have heard me say this a bunch of times….”As long as the spacing is consistent, all you will see is the texture” 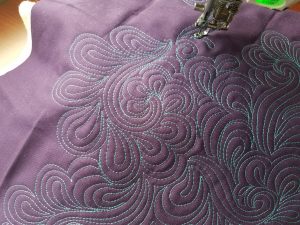 Keeping the echo lines somewhat consistent will make all the paisley feathers blend into each other. This is especially helpful while learning a new design because it means that any mistakes won’t stand out.

Using the quilting foot as a guide is one way to keep the lines evenly spaced out. That means while quilting, I am running the foot along the previously quilted line…..or at least attempting to do that. Remember, it doesn’t have to be perfect.

Once you learn how to quilt the Paisley Feather, there are so many different variations that you can come up with. Here are just a few:

Instead of echoing in the spaces between the paisley feathers, you can quilt a different design, such as pebbles. 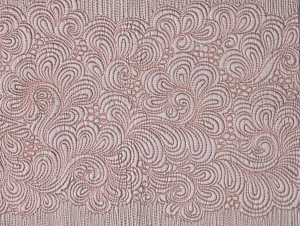 This allows the individual Paisley Feathers to stand out more, instead of blending in to each other. It takes a little longer to quilt, but the result is so worth it! 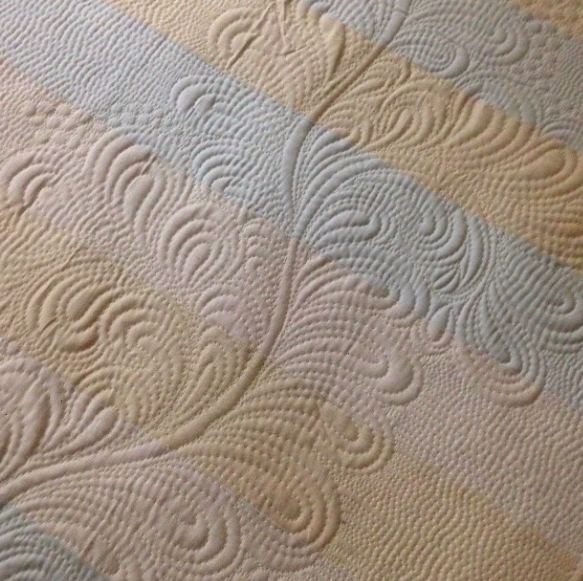 Swap Out the Paisleys

If paisleys aren’t your thing, you can play around with different variations. Throwing in a leaf every now and then adds a bit of interest to your quilting. 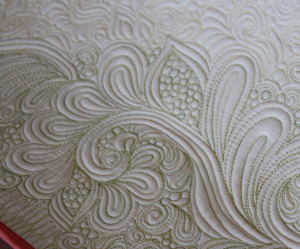 As an additional benefit, it makes the quiting look super difficult, but now you know how easy it is! I won’t tell anyone if you won’t!

I’ve put together a free downloadable Pdf of the tips in this post. Feel free to print it out and keep it close while working on your Paisley Feathers. Enjoy! 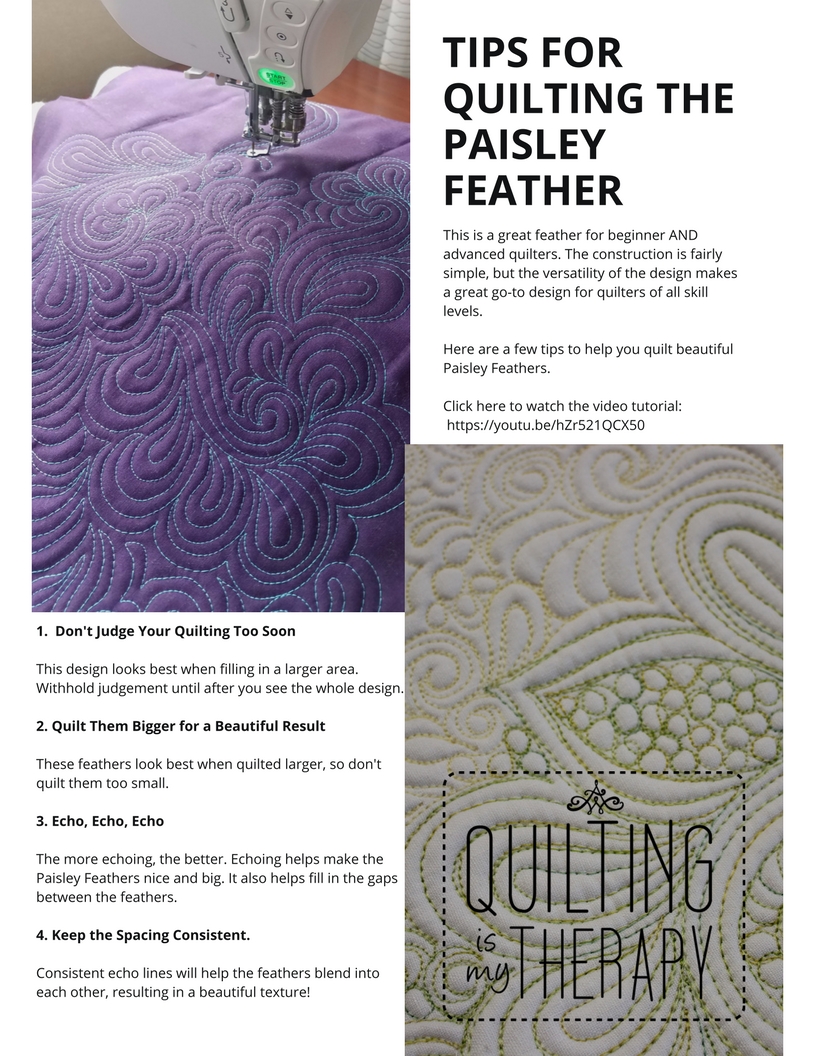 Are you excited to learn how to quilt the Paisley Feather? Without further ado, here is the video tutorial:

I hope you will leave a comment on the video letting me know what you think or if you have any questions. Not only does it allow me to connect with you, it also make YouTube more likely to promote it to other viewers!

Thanks so much and Happy Quilting!!